Culture, Out and About, Spotlight
by Megan Traudt

With her debut feature, Booksmart, Olivia Wilde has joined a growing number of actors-turned-directors tackling coming of age. The premise of the film is simple: Molly (Beanie Feldstein) and Amy (Kaitlyn Dever) have spent the entirety of high school devoted to each other and their grades in order to get into good colleges (which they did). However, on the last day of school, they discover that all the people who slacked off also got into great colleges—in some cases, the same ones as them. In a last-ditch effort to redeem themselves in the eyes of their peers and prove to themselves that they can be “fun,” Molly forces the pair to go to a party on the night before graduation.

The concept of outcasts using a party as a last-ditch effort to prove something is not uncommon. In fact, it would be impossible to watch this movie without thinking back to a movie like Superbad. The comparison is especially appropriate considering Beanie Feldstein happens to be the younger sister of the film’s co-lead Jonah Hill. However, Wilde crafted the film with sensitivity and care, creating a feeling more associated with Greta Gerwig’s Ladybird.

Wilde assembled an incredible cast. The ensemble of characters is made up of try-hard rich kids Jared and GiGi (Skylar Giordano and Billie Lourd), popular girl “Triple A” (Molly Gordon), mean girl Hope (Diana Silvers), and theater snob George (Noah Galvin). There are also brief but noteworthy appearances by actors such as Lisa Kudrow and Will Forte as Amy’s parents and Jason Sudeikis as the school’s principal (and part-time Lyft driver).

Wilde spoke of keeping the cast in sync first by hosting a viewing of  Fast Times at Ridgemont High and then by constantly playing music on the set in order to get everyone on the same rhythm. The successful results of these tactics are evident. Not only does every character feel fleshed out and nuanced, but the interactions between them are genuine.

The film is not without its faults. Despite the prevalence of lavish parties and elite colleges, the issue of social class is never addressed. Even as Molly is picked up from her apartment complex and driven to mansions around Los Angeles, the idea that she is less financially privileged than her classmates is not touched upon.

The lack of discussion surrounding the darker aspects of college admissions is particularly evident in the wake of multiple recent admission scandals. It is not difficult to imagine that Molly, with her apparent lack of wealth and connections in comparison to her classmates, had to work harder to get into the same schools as them. If she slacked off, she would not have the same cushion to fall back on as did her peers.

The film is also being lauded for the treatment of Amy as a gay character. Her driving force is not her sexuality but rather her crush on a female classmate, Ryan (Victoria Ruesga). How she identifies is clearly an important part of her, but it is not the only aspect of herself that is dwelled upon. Her main purpose in the movie is not to depict the plight of gay women, but it is a simple fact of her life and identity.

Wilde demonstrates an overwhelming sense of commitment to portraying all the characters as indicative of their time. Like all great coming of age movies, the culture of the generation being represented is deeply important. Wilde does a commendable job demonstrating the specific ways in which passion, compassion, and the desire to be informed are currently espoused.

Booksmart is smart, genuinely funny, and a great representation of modern teenagers. Although unique unto itself, like Superbad and Ladybird, it is an instant classic. Seeing it would be one of the many growing opportunities to support female-driven cinema and, as an added bonus, you may laugh a little—or a lot. 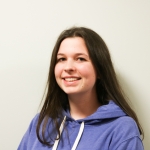