This is the NCAA tournament.  The best of the best.  How would #2 seed Boston College fare against #7 seed Princeton, an opponent they had not yet seen this year?  Before Saturday’s matchup, the BC Women’s Lacrosse team had outscored opponents 362-207 this season. Despite the dominance they have enjoyed, no matchup in the NCAA Tournament is ever going to be easy.

The Eagles did start out strong with two quick goals within the first three minutes of the game. But Princeton proved to be incredibly efficient in transition and were able to respond with two goals of their own and maintain a close game. The score was 4-4 with 20 minutes left in the first half.

The Princeton Tigers showed up Saturday afternoon firing on all cylinders and refused to let up easily in the first half. Their offense was aggressive and efficient and their defense was ferocious.  The most notable part of the Tiger defense was their goalie, Sam Fish, who made five saves — and only allowed four goals — within the first 18 minutes of the game.

It was clear to all spectators that the Eagles were in for tough game and they needed to get their offense clicking as soon as possible.

But what happens when the Eagles could not manage to find the back of the net for 17 minutes straight in the first half of the NCAA quarterfinal matchup?  Fear? Panic? Could the Tigers be BC’s kryptonite like the Tar Heels were in the ACC Championship game?

Not on Sam Apuzzo's watch.

Within a span of three minutes towards the end of the first half Apuzzo netted three shots and helped the Eagles regain the lead with a score of 7-6.  Eagles goalie Abbey Ngai made sure to hold that lead as she made two clutch saves in the last 30 seconds of the first half.

The Eagles opened up the second half with five goals in five minutes.  The crowd was roaring and the BC players and coaches were visibly elated as they could all be seen with big smiles. The Tigers were trailing by five, down 12-7, and they knew they could no keep up with the Eagles.

Once BC got into their groove, Princeton’s stonewall defense suddenly started to break down.  There was no obvious change in BC’s offensive game plan in the second half compared to the first; the only difference was BC possessed the ball much more and the team was patient passing the ball around until they found the perfect look.

That patience was rewarded, as the Eagles poured on five more goals before the clock expired.  Princeton tried to stay in the fight and finished with 12 goals, but the final score of 17-12 does not reflect how much BC dominated in the second half.

The Eagles’ victory over Princeton has earned them a spot in the Final Four of the NCAA Women’s Lacrosse Tournament, marking their third consecutive year in the Final Four.  Boston College will face off against the #3 seed UNC Tar Heels next Friday, May 24th, in Baltimore, Maryland.  This season the Eagles are 1-1 against UNC and dropped the most recent game to them. BC will look to get revenge against the only team to have beaten them this year and advance to a third straight finals appearance.

The Eagles and Tar Heels will meet in the much-anticipated matchup this coming Friday, May 24, at 5 p.m. The game will be available to watch on ESPN 3. 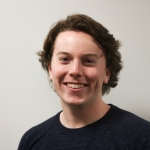