BC News, News
by Ella Jenak

On the evening of December 4, Boston College’s Americans for Informed Democracy hosted a unique event entitled "The Last Lecture", in which they invited Jack Dunn, BC’s director of public relations, to impart upon the audience a speech that he would proudly call his last lecture were he on his deathbed.

In 2007, when doctors told Professor Randy Pausch of Carnegie Mellon University that his pancreatic cancer was terminal, he thought of his home, his family, his career--and prominently of the students to whom he delivered a last lecture on the subject of pursuing childhood dreams.

Since Professor Pausch’s final lecture and his eventual passing, universities and organizations across the country have carried on the torch of his legacy by hosting hypothetical “last lectures” of their own in which select professors impart upon listeners the wisdom that they would feel most inspired to share at the end of their lives.

Americans for Informed Democracy hosts a Last Lecture event annually and puts the selection of a speaker up to a club vote. Victoria Schliep, one of the club’s co-presidents, explains, “We try to pick a faculty member who students look up to and who really reflects what BC means as an organization and as a university.” 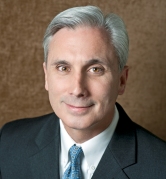 As a wildly popular professor (just ask any of his students, or take a look at his nearly perfect PEPs reviews) and the media face of Boston College, Dunn certainly meets both of these criteria.

While Dunn did not deliver Thursday’s lecture in anticipation of death, the vulnerability and the deep introspection with which he spoke about suffering, regained faith and, most prominently, gratitude was reflective of the serious context in which this tradition of speech-giving was established.

Dunn presented his lecture as six simple lessons that he embellished with his own personal anecdotes and tearful memories of lost friends and periods of wavering faith.

He began his lecture by urging the audience to remember the importance of gratitude and introspection. His conviction is that through quiet contemplation “we get to realize how many moments of joy exist in our lives,” and when we reflect on our blessings, we “can’t help but to become more grateful.”

Among the blessings that Dunn reminded his audience to cherish was the incredible blessing of being at an institution such as Boston College and the power of education as a “great equalizer.”

But according to Dunn, educating and bettering oneself is not enough to lead a happy and impactful life. “Take your God-given talents, develop them and give them away in service to others,” preached Dunn in homage to the Jesuit ideal of serving as men and women for others.

Given BC’s ambitious student body and prestigious reputation, Dunn worries that many students feel swallowed up by a pressure to “do great things.” But, he cautions, students should not “forget to do the little things, because it’s the little things that add up.”

Little things such as giving a friend a call when they may need it, or instilling confidence in another person gives all of us the courage we need to pursue our ambitions. As Dunn said, “It all begins with believing in yourself.”

After concluding his reflective and emotionally charged lecture, Dunn opened the floor up to questions from audience members, many of whom were devoted students from his Advanced Public Relations course.

When asked what the best piece of advice he ever received was, Dunn responded without hesitation, “To expect the unexpected and to believe that you can get through whatever comes your way.”

Worrying that he had quickly become cliché, Dunn qualified his response by saying, “That sounds a bit trite, but it’s true.”

Much less commonplace was Dunn’s answer to a question about the greatest challenges he faces in his position as head of PR for the university. Among his largest struggles, Dunn cited composing press releases about tragic events in the school community and writing about policies with which his personal convictions conflict.

One hotbed issue which Dunn gave face to in multiple television interviews is the university’s policy of not supplying contraception to students on campus.

Regardless of whether or not Dunn’s convictions align with this and other viewpoints and regardless of the mild embarrassment his presentation of the policy has caused his daughter (who was in the audience), as the face of Boston College in the media it is Dunn’s job to reconcile his personal convictions with those of the university. “It can be frustrating,” he admitted, “but I understand it.”

Despite the occasional inconsistencies between Dunn’s opinions and the policies of the university, Dunn (a BC graduate himself) closed with a statement of pride for what Boston College has become over the years and a confident prediction that “its best days are still to come.”